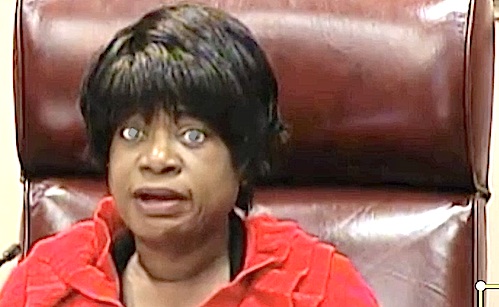 The vague, allusive speech went on for some time—you can see it in full below, starting around the 49-minute mark—and at one point, Boynton addressed her listeners’ befuddlement:

“Just so you understand, a lot people don’t know I was going through a lot of things and I kept it to myself.

“I broke down a code. And I sent it to George Bush, former president George Bush. And I also sent it to former Gov. Jeb Bush. And I think my actions in breaking that code down, coming from where I am from, will let you know that …”

She then stopped and addressed the board.

“It was about 9/11 … you are going to get sketchy thoughts. I am not able to talk to anyone about it. And the police are not able to come near me and they should continue their stance with that. I do have help, and I am OK. But there was someone who wanted to hear something on TV.”

In a later interview with the Star-Banner, Boynton insisted that she was not mentally disturbed: “I’m not crazy. I am not on medication, I’m not under counseling. I know it sounds strange but I can’t talk about it right now.”

A local TV crew asked Boynton about the nature of the threat she alluded to in her speech. “I can’t say all of that,” she answered. “I can’t tell you all of that, but there was movement around my house, OK?”