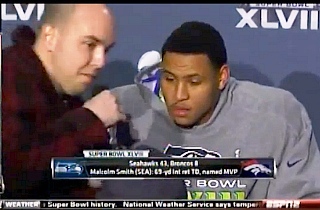 “Investigate 9/11,” the unidentified man said into the microphone. “9/11 was perpetrated by people within our own government.” He was quickly shoved out of the room by security.

It’s unclear how the man was able to charge the press table so quickly, but he seems to have been wearing press credentials around his neck. The incident comes just days after Deadspin published a lengthy article that alleged Seahawks head coach Pete Carroll might be a 9/11 conspiracy theorist.