Okay So NFL is Non-Profit 501 c 6 Organization BUT The COMMISH Takes $28M Salary?

NFL commissioner Roger Goodell was paid a salary of $29.5 million to run the NFL, though the NFL is technically a 501 c 6 organization, a.k.a. not for profit.. 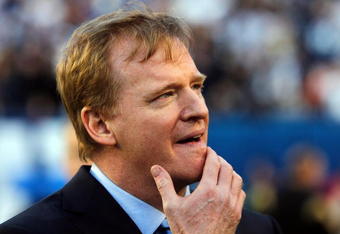 In order to have that status, the NFL must be run as a charitable foundation. In 2012, they gave away a meager $2.3 million. Almost all of it–$2.1 million– went to the NFL Hall of Fame, reports ShowBiz411.

Are you ready for this? Goodell made 15 times what the group donated to other charities.

Or even crazier: the NFL only made charitable donations equaling one-one hundredth of their annual income.

Roger Goodell is listed as having a net worth of $45 Million.. However, his annual salary is listed at $28 Million..

Under “grants”– meaning donations to other non profit organizations, the NFL did increase the number from just over $900,000 to $2.3 million. Generous right? However: their total salaries increased by $27 million to a total of over $107 million.

Here’s the best part: after all that, thanks to creative thinking, the NFL claims it finished the year in the red  with negative $316 million.

What else did they spend money on? Well, for one thing, new office construction cost $36 million. That’s thirty six million dollars.

Just to put all this in perspective: going by numbers in Forbes, Goodell would come in at around number 28 of the highest paid CEOs in 2012. He made more than the heads of FedEx, AT&T, Heinz, Ford Motors, Goldman Sachs, as well as Rupert Murdoch.

And if you’re wondering, neither Major League Baseball nor the National Basketball Association is registered as a charity, foundation or trade organization. They each gave up their tax- free status years ago.