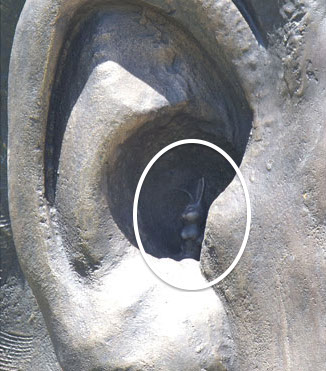 In this photo taken Wedensday, Jan. 16, 2014 a new, 9-meter (29.5-foot) sculpture of Nelson Mandela, with a barely visible sculpted rabbit tucked inside one of the bronze ears. The statue is billed as the biggest statue of the South African leader. Officials want the miniature bunny removed from the statue, which was unveiled outside the government complex in Pretoria, the capital, on Dec. 16, a day after Mandela’s funeral. (AP Photo)