Prosecutors are asking an appeals court to reject a challenge by Illinois Gov. Rod Blagojevich who claims he did not get a fair trial. Blagojevich, 56, has been sitting in jail since 2012 and his prison term runs until 2024. 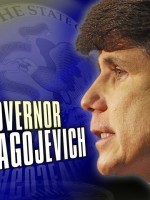 In July, Blagojevich’s attorneys filed an appeal claiming they were prevented from mounting a vigorous defense for the ex-governor. The appeal noted that Blagojevich was forced to take the stand in his defense and then was limited as-to what he could testify.

Jurors convicted Blagojevich on 18 counts, including trying to profit from his power to name someone to Obama’s vacated Senate seat.

“This is an extraordinary claim,” prosecutors said in its filing. “No matter the price he charges, a public official who sells his office engages in crime, not politics.”

A three-judge appellate panel could schedule oral arguments and then issue a ruling within months.

Blagojevich was famously wiretapped in a conversation about Obama’s seat, which he described as “fu—–ing golden,” concluding, “And I’m just not giving it up for f—— nothing.”