OUCH!!!! Talk about a bad review X-100! Justin Bieber just got crucified by AP NEWS music reporter, MESFIN FEKADU – in a review of the singer’s headline performance in Newark, NJ. 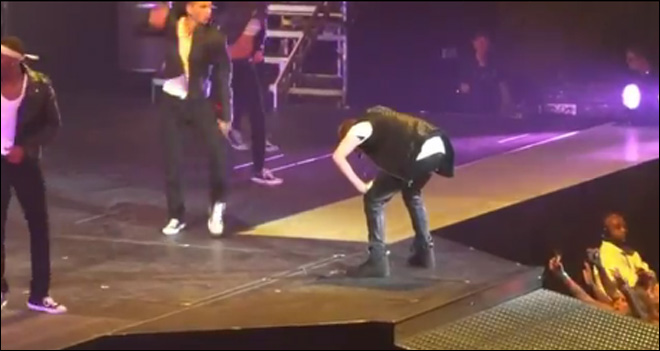 AP: During the opening up-tempo numbers, he seemed to be lip syncing and his sluggish, lazy dancing didn’t match the oomph of the beats. Bieber was far better when he slowed things down, singing on grooves or mid-tempo tunes. But the multiplatinum singer is part of a group of contemporary acts who have a plethora of hits, but have not yet learned how to fully command onstage and truly connect with an audience.

Bieber phoned in a good amount during his show; at some moments, he even appeared bored. He was clocking in – another day, another sold-out concert (Wednesday was Bieber’s second night at Prudential).

I know Bieber’s antics are not for everyone, but when a major news outlet comes down on an artist, it usually spells the beginning of the end.. But this was not where the bad review ended, the reported made one final jab at the Biebs, the unthinkable “comparison,” as in, “not as good as, “——–” fill in the blank..

When performing the hit “Beauty and a Beat,” he couldn’t keep up with his background dancers. He was lip syncing again – much like a number of today’s pop stars when trying to keep up with decent choreography. Though talented, Bieber isn’t as good as Chris Brown, who also appears to lip sync but dances with clarity, precision and edge. During “She Don’t Like the Lights,” Bieber barely moved to the track’s futuristic beat (maybe it was the leather tights?)