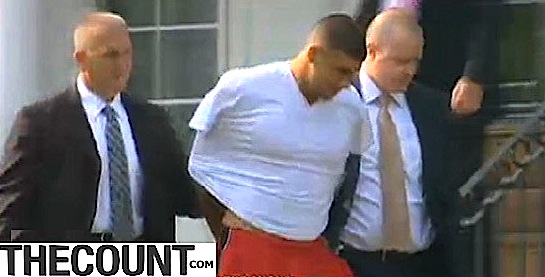 TMZ is reporting and this picture implies.. The star NFLer was taken into custody in connection with the murder of a man whose body was discovered close to the NFL star’s home.

Hernandez was taken into custody at his home in Massachusetts. He was handcuffed and led into a waiting police cruiser, which left the scene moments later … presumably headed for a local police station.

The 23-year-old NFL star is reportedly set to be arraigned later today.

There are reports based on law enforcement sources that Hernandez destroyed evidence and could be charged with obstruction of justice. So far, no formal charges have been announced.

Lloyd’s body was discovered in a park in North Attleborough, Mass last Monday. It appears he was shot through the back of the head.

Hernandez’s arrests is just one in a long line of recent troubles for the NFL.