38-year-old Bradley Cooper has dumped Suki Waterhouse, 22.. According to the inquisitr Coop may have taken a cowardly but common way out of the relationship. 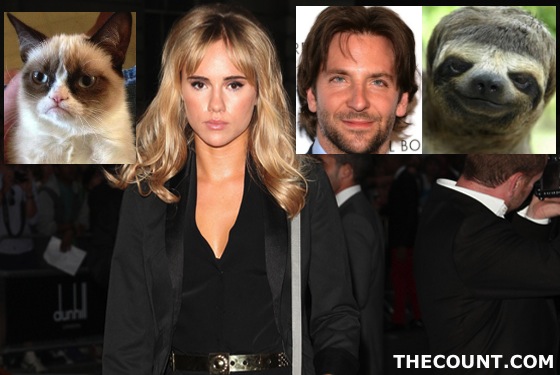 Maybe he’s a little too busy to find time for Suki Waterhouse, but another report claimed that he attended the National Conference on Mental Health and then took his companion, a mystery woman apparently known only as Alex, to dinner in a corner booth at the Tombs in Washington, D.C.

Hmm. I guess if you’re that famous, you don’t have to reply to your girlfriend’s texts. You can just let the gossip reporters do the dirty work of letting her know that it’s over.

That report claimed Waterhouse was the one who actively pursued Cooper in the first place, which is something she might have learned not to do from watching his 2009 romantic comedy, He’s Just Not That Into You.

Cooper might be much older, but he doesn’t appear to be ready to settle down. In a relatively short period of years, he has been linked to Zoe Saldana, Jennifers Anniston and Lopez, Olivia Wilde, and Renee Zellweger. He also found time for a brief marriage to Jennifer Esposito.

Ignoring the texts from a girlfriend who is getting too pushy may be a tacky move, but I’m thinking Waterhouse probably should have known he was a player from the start.

This is not the first time Bradley has gone with the love em and leave em atitude!