Viral breakup letter. Check out this breakup letter that has gone super viral.. It may give you some ideas if you’re looking for a creative way to say, “see ya!” 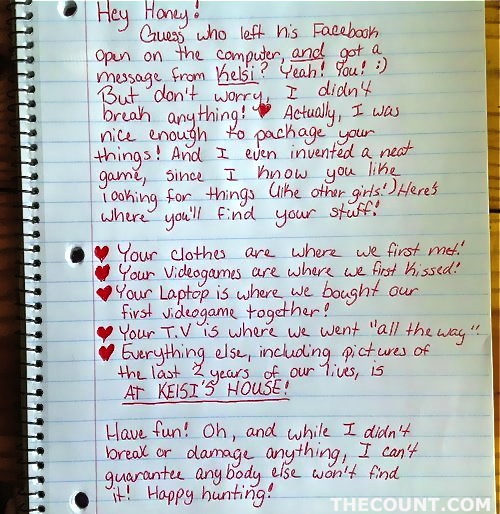 “Guess who left his Facebook open on the computer and got a message from Kelsi? Yeah! You! :) But don’t worry, I didn’t break anything! Actually, I was nice enough to package your things! And I even invented a neat game, since I know you like looking for other things, (like other girls!),” the letter reads.

The letter goes on to provide several clues to the whereabouts of the alleged cheater’s belongings.

The writer then informs the letter’s recipient that “everything else…is at Kelsi’s house!”

She concluded with this: “Oh, and while I didn’t break or damage anything, I can’t guarantee anybody else won’t find it! Happy Hunting!”