Jeff Probst Katie Couric. You know him from “Survivor,” but host Katie Couric knows him as the guy who “forgot” to ask her for her phone number, after an arranged date paired the unlikely couple. 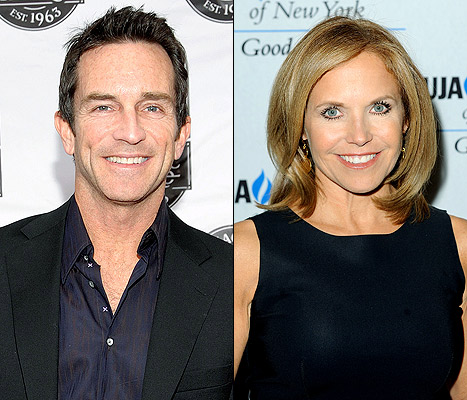 “Katie and I were set up by a mutual friend several years ago. In fact, I don’t know if Katie remembers, but that same friend originally tried to set us up way back in 2001,” Probst wrote in an email to Us Weekly, responding to an interview Couric did about the date Wednesday on Howard Stern’s SiriusXM radio show. “I remember because we were filming ‘Survivor’ in Kenya which is cool enough — add to that a date with Katie Couric — it had the makings of a pretty epic summer. But the timing never worked out and so we never met.”

Probst said he and Couric eventually connected for a date a “few years later” in New York.

“What I remember most about the date is how nervous I was and how little I offered to the conversation,” Probst said. “It was like I forgot how to go on a date. Like I was 14. We talked a bit about her kids and the challenges of being a parent to teenagers, and we talked a bit about our careers and lifestyles but we never got much beyond the surface.”

Probst claims that he would have asked Couric out on a second date, but he never got her phone number, but was there not another way for him to get the popular journalist’s digits?

“The only reason I didn’t call back was the date was set up through her assistant and I never got her number. It felt weird to call her assistant for a second date,” he said. “So it never had a chance to be a romance. Who knows what might have been? But it’s a date I definitely remember! I mean, come on, it’s Katie Couric!”

Couric, in classic looking for brown fashion, said she thought it was “weird” that Probst wore puka shells on their date.