Sandy Hook LT. J. Paul Vance Involved In Boston Marathon Bombing! TheCount.com EXCLUSIVE!! If you know anything about the growing number of Sandy Hook hoax conspiracy theories, then you know a number of them surround LT. J. Paul Vance.. Well lookie who TheCount.com found issueing the APB for a green Honda in connection with the Boston Marathon bombing manhunt! You guessed it! Vance! 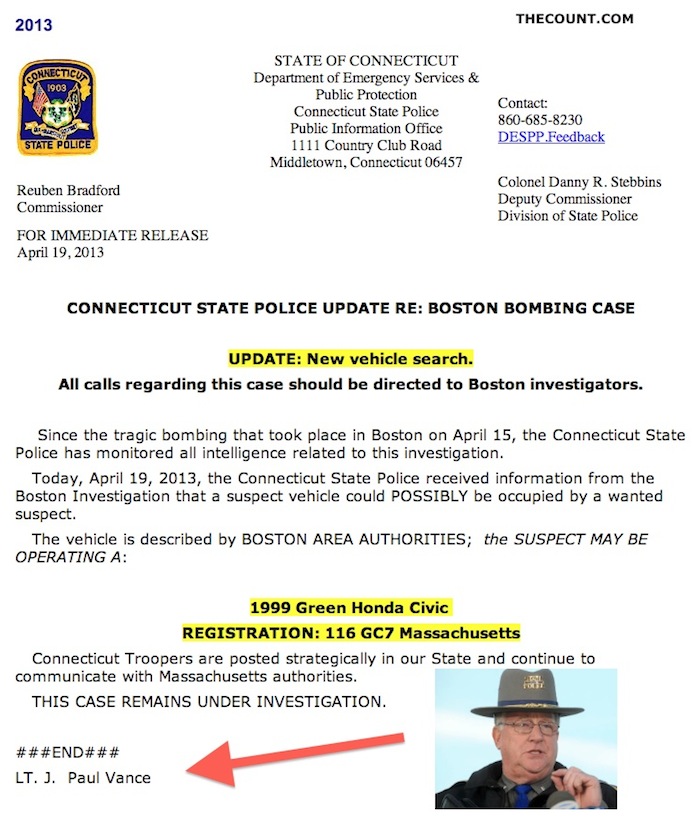 All calls regarding this case should be directed to Boston investigators.

Since the tragic bombing that took place in Boston on April 15, the Connecticut State Police has monitored all intelligence related to this investigation.

Today, April 19, 2013, the Connecticut State Police received information from the Boston Investigation that a suspect vehicle could POSSIBLY be occupied by a wanted suspect.

The vehicle is described by BOSTON AREA AUTHORITIES;  the SUSPECT MAY BE OPERATING A:

Connecticut Troopers are posted strategically in our State and continue to communicate with Massachusetts authorities.

THIS CASE REMAINS UNDER INVESTIGATION.