Drew Barrymore Says She Grew A Goatee During Pregnancy

I think I just threw up in your mouth a little.. Drew Barrymore admitted the gross fact that she grew so much hair on her chin during pregnancy, that it qualified as a goatee.. Remind me to cross motherhood off my list of thing to try in this lifetime.. 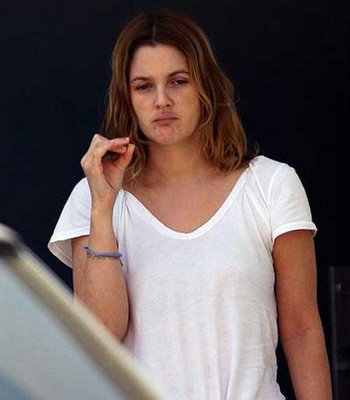 The ET actress had her first child, daughter Olive, back in September but only recently revealed In Touch magazine that her appearance has drastically changed since giving birth.

But it’s not the curves she’s worried about it’s the … facial hair!? “I got a wonderful little goatee — and it was red!” Barrymore, 38, who just launched her Flower Beauty cosmetics line, confessed to In Touch. “I also got hyperpigmentation on my cheeks.”

I feel kind of sorry for her hubby, Will Kopelman, because he’s the one who has to compete, facial hair wise, with his own wifey..

“If I was going off to a desert island, concealer is the one thing I’d want to take. It’s the only product that I couldn’t make it without!” she concluded.