I did not know that money still bought all the comforts of home, in jail… Apparently, OJ Simpson had a rocking Super Bowl party in his JAIL CELL! 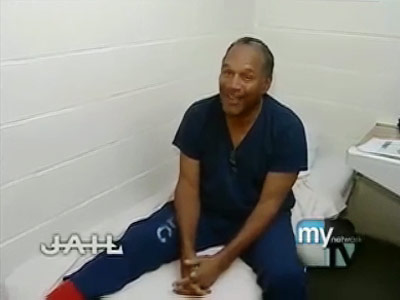 “If you have the money, you can buy a TV at the inmate store and put it in your cell,” Simpson’s friend, Norman Pardo, told the Post. “There was no shortage of potential guests because he’s so popular. He’s like the Godfather of the prison now.”

So a dozen or so of Simpson’s closest prisoner buddies crammed into his 80-square-foot cell to watch.

Can you shape a chicken wing into the shape of a key and escape? Hide a file in pizza? Turn nacho cheese sauce into an explosive? Since Simpson is still in prison, probably not.