An Amber Alert has been issued in connection with the abduction of 14-year-old, 8-month-pregnant girl, Katelyn Mosquito. 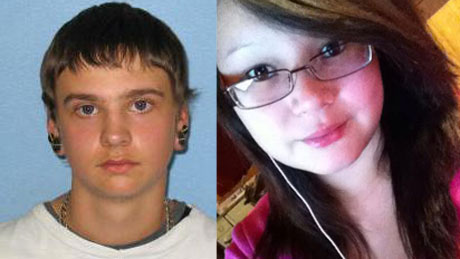 Katelyn is described as:

Five-foot-three.
Weighing 160 pounds.
Brown hair and brown eyes.
She was last seen Wednesday night, and is believed to be wearing an orange hoodie with “Maple Creek Composite High” and pyjama-type pants.

Police believe Katelyn was taken by Jonathan Hansen, 16, also from the Maple Creek area, which is in the southwest corner of the province. He is described as:

Caucasian.
About five-foot-11.
150 pounds.
Has light brown hair and blue-grey eyes.
Both ears have spacers in them.
Jonathan may be driving a green 1995 Ford Escort with Saskatchewan plate 637 HEE.

He may be travelling west into Alberta.

Cops say the teen was forcibly removed from sister’s home…

Police said the girl and her abductor were in a relationship, but could not confirm if he is the father.

Police ask anyone with information about Katelyn to call 1-877-762-6237 or email fdiv_amber_alert@rcmp-grc.gc.