Gawker reporting on this one: 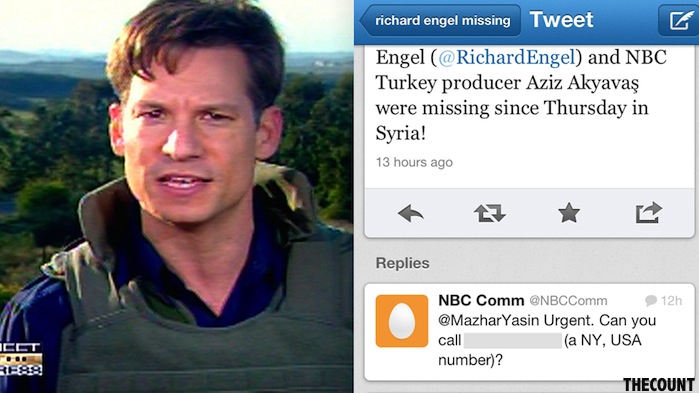 NBC News chief foreign correspondent Richard Engel has gone missing in Syria, according to Turkish news reports. The reports also say that Aziz Akyavaş, a Turkish journalist working with Engel, is unaccounted for. NBC News has been successfully keeping Engel’s status subject to a news blackout—one to which Gawker agreed until now—for at least the past 24 hours.

Turkish newspaper Hurriyet is reporting that Engel and Akyavaş were last known to be in Syria and haven’t been in contact with NBC News since Thursday morning. The news has been reported widely in the Turkish press over the past 24 hours, including by Turkish news channel NTV, which presents itself as an international partner of MSNBC. It’s also been widely distributed on Twitter.

But NBC News has been asking every reporter who inquires about the report to participate in a news blackout. It has also taken to Twitter and asked people who repeated the Turkish reports there to take them down. You can see here a screengrab of the Twitter account @NBCComm asking a Twitter user who had mentioned the reports to urgently call a cell phone number (that account has since been taken down).

NBC News declined to comment for the record about Engel’s whereabouts, but asked Gawker not to report what it characterized as “rumors” about Engel’s current status.

The Turkish reports have been referenced on Twitter by Slate’s David Weigel, Michelle Malkin, former MSNBC anchor David Shuster, and hundreds of others.