A Virginia father has been arrested and charged with assault after carving a pentagram into his six-year-old son’s back on 12,12,12.

The man calmly called 911 operators and described his despicable act,  “I shed some innocent blood.” When the operator asked him to clarify the man responded, “I inscribed a pentagram on my son.” 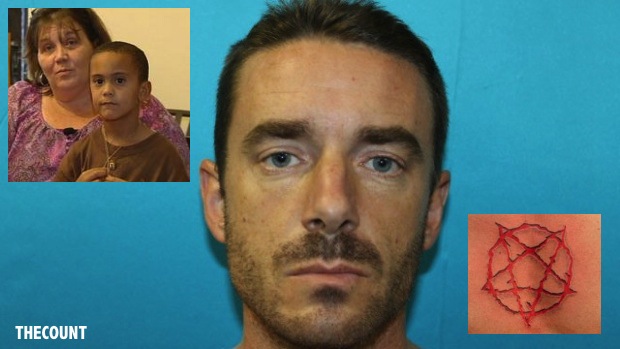 The man was arrested at his residence where they found the boy covered in blood with the freshly carved pentagram as big as his entire back.

Brent Troy Bartel, told 911 operators when asked why he committed such a horrible act, “because it’s 12,12,12, a holy day.” But unless Bartell was talking about a minor Catholic holiday which falls of 12,12,12, the date is not really significant for anything, especially anything pagan related. Cops surmise the man confused 12,12,12 with the Mayan calendar’s date for the end of the world of 12,21,12. What a dumb ass.

At the same time psycho dad was calling 911, the child’s mother also called 911 from a neighbor’s home stating her husband was hurting their child.

Police on the scene said the carving covered most of the boy’s back.

The child was transported to a local Children’s Hospital for treatment.