According to them, Ashanti has been basically making a fool out of Nelly for years, sleeping around, lying and trash talking him behind his back, and though friends warned him of her behaviour, he did nothing, until now… 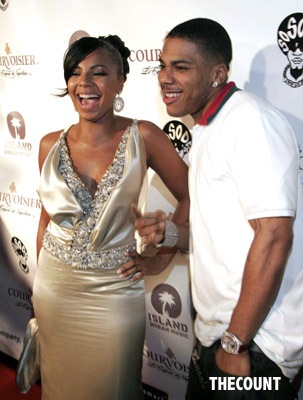 For years Nelly has been hearing rumors that Ashanti was sleeping around, but he didn’t want to believe the rumors. It’s never been a secret that Shanti ain’t exactly sweet and innocent and amongst industry folk it is common lore that Irv Gotti hit that. But for the longest time Cornell chose to disregard rumors that Shanti had been passed around amongst rappers like Jay-Z and Nas as well as among lesser known producers, like Chink Santana.

Well you need only look at Ashanti and Keyshia Cole videos like “Don’t Let Them” and “I Should’ve Cheated,” both videos which used Chink as the leading male love interest which sparked talk back as far as 2005 that the two women hated each other because they both were involved with Chink — at the same damn time!!! Ironically, Chink was also married at the time, a fact Ashanti later used to deflect Nelly’s suspicions after he heard talk about their involvement. In addition to serving as eye candy to both ladies he also did double duty behind the boards, producing on several songs with each. He also had easy access to Ashanti as Irv had brought him on as part of The Inc team.

Nelly may have been taking crap for some time but something tells me there must have been a flashpoint that made him pull the trigger, either way let’s face it, he’s no angel either.