Talk about a strict dress code! Basketball great, Michael Jordan was banned from a Miami golf course after refusing to change his cargo shorts! An avid golfer, Jordan is not a member at the Jack Nicholas designed golf course but plays there frequently, showing up whenever he feels like it and acting bossy. Well today was not his day and it had nothing to do with his swing and everything to do with his style! 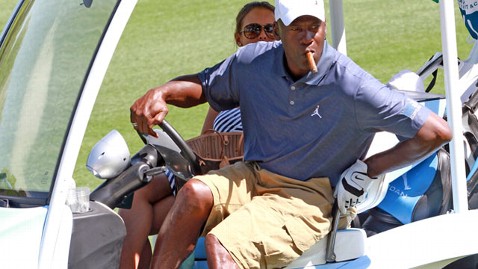 Cargo shorts are a real no-no at the Gorce Country Club and a golf course staffer was only doing his job when he requested Jordan go back to the clubhouse and change out of the band apparel, but jordan refused. It was soon after the club took the shocking step of asking Jordan to never return! Kind of harsh considering the whole ordeal was over a pair of shorts! And lest-we-forget, he IS Michael freaking Jordan!

On a side note, I had the misfortune of actually meeting Michael Jordan once and coincidentally it was also on a golf course, this time it was in Las Vegas, NV., I politely asked him for an autograph and he arrogantly declined me… I’d be lying if I said it didn’t hurt my feelings. Well what goes around comes around! Huh sport? On a side, side note, I met Shaq once and he was so cool!