150 fans and journalists have just landed – after traveling with Rihanna for seven days on her private Boeing 777 as part of her 777 Tour –  And by checking out the participant’s tweets, we are just starting to get a feel for what the conditions were like on that plane, from most accounts, not so great. 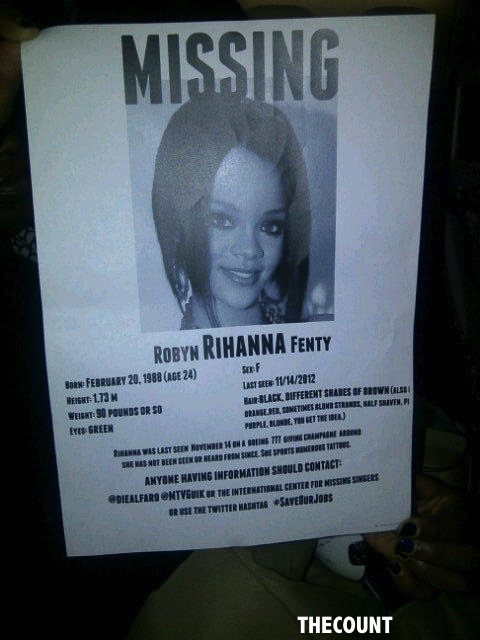 The one most most complained about items had to be the fact that Rhianna constantly disappeared from fans and journalists who never really got a good look at the singer over the seven days, and when they weren’t looking for Rihanna they were waiting for her, on the tarmac, for hours at a time, usually while Rihanna was making her way back from one of the countless party tour stops. When Rihanna finally did show up, she was whisked away to a private area of the plane, where beleaguered fans and journalists were not invited.

Gawker collected some of the tweets and posted them on their website today and now I offer them to you.

After seven days in seven countries — seven tour stops separated by long rides on a Boeing 777 — our long national nightmare is over: the Rihanna plane has landed in New York, carrying with it the 150 beleaguered fans and journalists who’d been held captive at the whim of their Barbadian mistress. But for many, the last few hours were the hardest.

STILL ON THE TARMAC. I just. Cannot.

#overheard: “Is Rihanna here? Hope so. It means we won’t have to wait to leave” (getting to NY on time > photo opp./knowing meaning to life)

Rihanna had disappeared. Flyers were distributed:

Day 7: @rihanna MISSING posters are circulating on the plane. #777tour #Occupy777 come on Ri give a dude a solid look twitter.com/iamjustinjosep…

Journo fell asleep while attempting to file. 20 of us watched him sleep-type while hysterically laughing. #7 instagr.am/p/SQlTSYGeQx/

But she emerged, for the first time since the plane had taken off a week ago, just before it landed in New York.

Rihanna decided to come out from hiding when descending into NY. Of course. instagr.am/p/SQiDORkVaW/

Rihanna sits down to chat with us in the last few min of her #777tour twitter.com/VH1Music/statu…

And with that, the hostages returned, to cheering throngs of Americans with yellow ribbons tied around their arms.

Cheers, clapping, shouts of “USA!” on the #RihannaPlane. 150 people about to third-base the tarmac. Cc: @popdust. #777tour

OUR LONG INTERNATIONAL NIGHTMARE IS OVER #777plane #rihannaplane #freetherihanna150

In NY for day 7! @rihanna came out as plane was landing and did a mini press conference, said she would “do it all over again” #777tour

Came home, coughed, puked bile in the sink, nobody in my apt cares that i’m alive, going to die now, put rihanna’s face on my epitaph #rip