The premiere of Lifetime’s bio-flick “Liz and Dick” starring Lindsay Lohan, is just around the corner, November 25 to be exact and the scathing reviews are already hitting the web. One of my favorite reviews is by the Hollywood Reporter who did not pull any punches by calling the film “spectacularly bad.”

I just saw the trailer for Liz & Dick and one of the problems I had with it was I couldn’t stop thinking “Why in the hell is Lindsay Lohan’s voice coming out of Elizabeth Taylor?” Ideally filmmakers want people to suspend their belief and just enjoy the movie without having to think too much about its components… 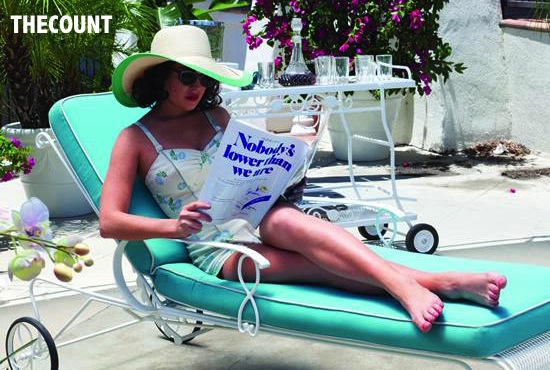 Hollywood Reporter: It should come as no great surprise that Lifetime’s Liz & Dick movie starring Lindsay Lohan is spectacularly bad. After all, it’s Lohan, more memorable in the tabloids than she ever was as an actress. No, the mystery here is whether Lifetime actually believed it had a major “television event,” as it says, because this was Lohan’s “highly anticipated comeback movie role,” as the channel’s website notes. Was Lifetime made giddy by the potential, or made blind by it? Most intriguing, did it know that casting Lohan of all people as Elizabeth Taylor would nearly burn Hollywood down — and shock the rest of the country as well, thus ensuring enormous ratings?

Lifetime’s website breathlessly asks visitors, “Are you finally convinced?” — with a link to a photo of Lohan as Taylor and a young Liz side by side. No, the photo is not convincing. Hair and makeup miracles do not make a movie. So calm down, Lifetime.

Lohan is woeful as Taylor from start to finish. But, whatever you do, don’t miss Liz & Dick. It’s an instant classic of unintentional hilarity. Drinking games were made for movies like this. And the best part is that it gets worse as it goes on, so in the right company with the right beverages, Liz & Dick could be unbearably hilarious toward the tail end of the 90-minute running time. By the time Lohan is playing mid-’80s Taylor and it looks like a lost Saturday Night Live skit, your body may be cramped by convulsions.

The movie co-stars Grant Bowler as Richard Burton, and he at least gets to play drunk half the time, deliciously mean a quarter of the time and, well, you’ll be staring at Lohan all the time anyway (though a good deal of the limited amount of tolerable dialogue from writer Christopher Monger — known for Temple Grandin — goes to Bowler.)

Executive producer Larry A. Thompson (Scott Hamilton: Return to the Ice, Amish Grace) and director Lloyd Kramer (a maker of Mitch Albom telefilms) have opted for the dubious trope of breaking the fourth wall, with Taylor and Burton dressed in all black, sitting on director’s chairs, with an all-black background. Ostensibly they are recalling their own lives, as if speaking to an interviewer. This is not only annoying and an expository cheat, it becomes ridiculous and laughable when Burton dies and Liz talks about how much she misses him. You want to yell, “HE WAS JUST RIGHT THERE!”

Anyway, on to the parts of the film where people walk and talk. The talking part doesn’t turn out so well for Lohan. There is not one minute in this film where she’s believable. It begins with Burton about to die and then quickly jumps back to Liz and Dick meeting on the set of Cleopatra. He must have her. She must be haughty. There are several troubling run-ins showing their disdain for each other. She calls him “the Welsh Don Juan” and intimates that nothing between them will never happen. “Oh, you’re quite safe with me!” he yells. “I never go after dumpy women.”

Both appear shocked that there’s a love scene in Cleopatra, her being Cleopatra and him being Antony, after all. One kiss and we get jaunty scenes of them running from trailer to trailer having sex while flunkies try to steer Eddie Fisher (Andy Hirsch) and Sybil Burton (Tanya Franks) away from their philandering spouses. But nobody steers the story in a direction that explains the loathing turning to love so quickly. It is mentioned that they like to fight. Don’t make fighting part of your drinking game. There’s an endless amount of it in Liz & Dick.

Taylor is petulant almost all the time. Burton is a lout. In one scene, sitting next to Fisher, Burton berates Taylor into proclaiming whom she loves more. In tears, Liz picks Dick. She then runs to the pool where her mother, Sara (Theresa Russell) spouts this gem: “Elizabeth, not that I’m counting, but if I’m not mistaken you’ve just ended, what, your fourth marriage?”

Much of Liz & Dick is about them trying to get married, arguing and drinking a lot, Burton buying a lot of jewelry, jealousy, more arguments, more drinking and petulance. At one point, Lohan has to shout, “I won’t live without you!” and then run down a hall. It’s like a high school play. She then tries to kill herself with booze and pills. If this starts to seem like a good idea to you, it’s time to switch the channel.

Believe it or not, only about 30 minutes have passed in the film. Taylor, secluded at one of the many houses the couple own — there’s a lot of globe hopping in the film, with a minor storyline about them being broke, which forces Burton to take on a lot of crappy films — then shouts this line: “I’m bored! I’m so bored!” Now, there’s a joke too easy to make here, but still it is entirely imaginable that the entitled Taylor would scream that. When Lohan does, however, it sounds like a whiny teen forced to watch some children’s clown show at the mall.

When Liz and Dick are apart, there’s a scene where Lohan/Taylor says, “Tell me, will this pass?” (though she says it without the comma). She then adds: “Because it doesn’t feel that it will.”

That’s when, drunkenly, you shout, “Sing it, sister!”

For a short film on two long lives, Liz & Dick truly drags. Luckily, you can’t take your eyes off of Lohan playing Taylor, which the producers clearly thought would work because they share similar backstories. Except for the part about Taylor being a gigantic movie star and Lohan not being one. Not even a star bright enough to transport you at least halfway to believing she’s Elizabeth Taylor.

The film gets into Taylor’s weight issues without really bloating Lohan up that much. There’s a “Cleo-Fat-Ra” headline that makes her cry. Burton says, “I will love you even if you get as fat as a hippo.” Seriously, he says that.

Liz & Dick eventually realizes that it’s running out of its allotted time, having spent it on – surprise! — more elaborate arguments and drinking scenes. The film then races forward, with Taylor getting her infamously immense diamond (because Burton had said her fingers were fat). Taylor begins to worry about her age, her stardom. Burton takes on more bad films, they divorce, he courts a princess, she courts Aristotle Onassis, they get married again, it goes badly — like this film — and eventually the race to the end is nearly complete.

But not before Burton dies and the late-era Taylor is unveiled for the first time. The moment Lohan appears in this get-up, it’s impossible not to laugh. It really does look like SNL. She can’t really pull off the young, sexy Liz with much believability, so the mid-‘80s look is awkward squared. She gets the news of Burton’s death and faints — a straight drop to the floor — that also somehow seems inadvertently hysterical.

Finally, the unbearable ceases — but not before yet more fourth-wall breakage (which, even by this time, never loses its “why are they doing this?” element).

Stunt casting rarely works. But in Liz & Dick it works by accident or for all the wrong reasons. Lohan as Taylor was a bad idea in the dramatic sense, but it’s pure genius both for marketing and for belly laughs and drinking games.