It’s going to be a nice Christmas for the friends and family of a couple of crooks who broke into JFK airport and stole over 4,000 iPad Mini’s worth a staggering $1.5 million.

The crooks, being described as “brazen,” used one of the airports own forklifts to load two huge pallets of iPad Minis onto a truck just after midnight on Monday. 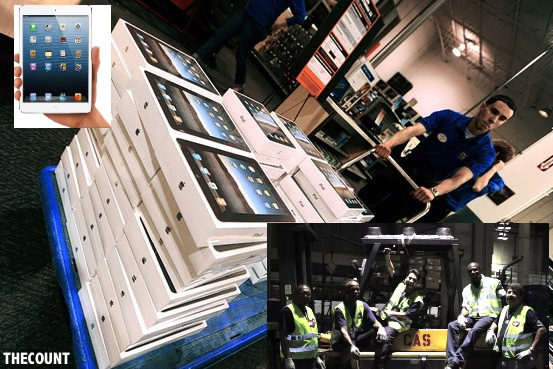 The robbers huge Apple haul was interrupted by an airport worker returning from dinner, if that guy hadn’t showed up, these guys would’ve got away with three more pallets of Apple iPads!

The crooks arrived at Building 261 around 11 p.m. in a white tractor trailer marked with the name CEVA on the side, according to the sources. They pulled up to the side of the airport building that faces onto a street and has less security than the other side, which is accessible from the airport tarmac.

Sources believe someone let them into the area and then let them out after they grabbed the iPads.

It was back in 1978 that a group of other crooks sold $5 million in cash and about $1 million and jewelry from the very same building located at JFK, that heist was featured in the movie “Goodfellas.