Could this 1986 Batman comic “The Dark Knight Returns” have something to do with the shooter’s morbid plan to kill? 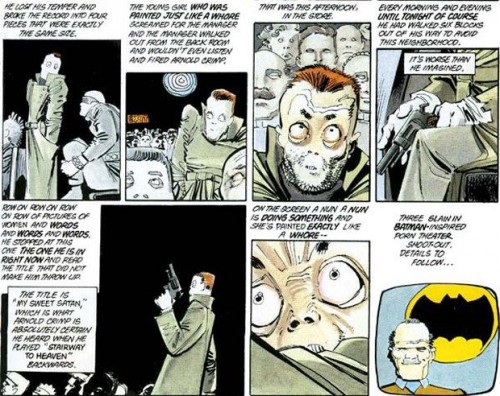 Some think that it quite possibly could…

The Washington Examiner says this about the comic: “The 1986 comic, written and drawn by Frank Miller, was a key inspiration for the Chris Nolan Batman films. It helped to reimagine the character away from his Saturday morning cartoon image and into a dark, grim avenger. The point of this particular scene in the comic was to show just how far Gotham has fallen since Batman had retired.”

Even if it was the killer’s ‘inspiration’, we will NOT be recognizing him as any sort of ‘artist’ or ‘prodigy’- he won’t be getting any prize but the gift of endless-painful torture for killing innocent people.

Can you believe that this is the number one suspect? 24-year-old James Holmes looks like he could be an American Idol contestant- perhaps the lovable Phillip Phillips. I guess you never know what a killer could look like? Did he do it?