After doing some research about this so-called zombie virus, I found lots of various opinions of people that think:
A. A zombie outbreak is possible
B. Zombies will never be real
C. The LQP-79 virus is real
D. It’s all a conspiracy theory

This is a great topic, so I decided to answer these questions based on some research I have done.

Answers:
A. So, is a zombie outbreak possible? Could one’s soul leave the body, and then a hungry, flesh-eating zombie spirit take over the ‘dead’ body? Does one’s soul have to leave the body, in order for one to become a zombie?

The old zombie tale is usually the same. A zombie who is infected with a virus like LQP-79, bites a healthy living person, then the healthy person dies quickly and their spirit leaves. At that point, the now deceased human body ‘turns’ and becomes alive again- yet they are dead and walking. The only way for the zombie to continue thriving, is to eat flesh. 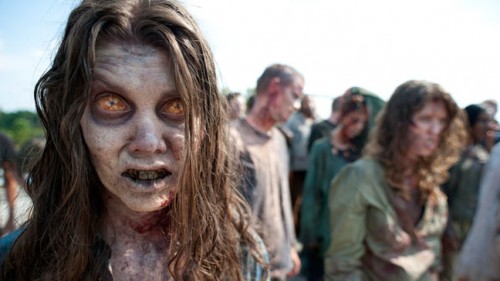 B. Could the old zombie tale actually come true in real life? ‘Why not?’ many say, as people are chatting on the Web about the recent ‘Miami zombie man‘ who ate another man’s face off like he was a zombie. Miami Police used ‘bath salts’ the drug, as a cover for the incident, and declared bath salts the reasoning for the zombie man’s attack on video.

An exclusive news story came out stating that the Police did guess that the zombie man was on bath salts, and the truth of what drug or why the zombie man went nuts, won’t be known until a toxicology report comes out plus other information.

So what does one have to act like, look like and feel like to become a zombie? Who decides if one turns into a zombie or not? Can you judge a possible zombie by their behavior i.e. are their eyes missing a soul? Is the possible zombie walking with a limp? Is the p.z. grunting? Does the p.z. look dead? Is the p.z. constantly eating meat? HOW DO YOU KNOW FOR SURE ONE TURNED INTO A ZOMBIE?

C. Rumors have been flying around that the zombie virus is called the LQP-79 virus. Where did the virus come from? Is it like the flesh-eating bacteria ‘Necrotizing Fasciitis‘ or ‘Naegleria Fowleri‘ the brain-eating amoeba- all found in warm lake water? If LQP-79 is like both of these combined, then a person would be brain dead plus their skin and limbs would rot. An infected person wouldn’t even be able to walk… unless- they had an extra element that made them hungry for iron (blood) and calcium (bones, milk, cows). Say that this combination made the LQP-79 virus and turned people into zombies, how long could one keep living under these conditions?

In my opinion, without nanobots repairing the organs, or some other new drug that quickly repairs the body, then zombies really couldn’t survive very long- but the virus could…

D. Some people out there are saying that the LQP-79 virus is a conspiracy theory and so are zombies. Well, after looking around out there on the Web of truth and lies, the LQP-79 is not established as a ‘real’ virus by any official disease control group like the CDC (Centers for Disease Control and Prevention). The CDC joked on their currently crashed site about ‘Zombie Preparedness’ back in 2011, which I thought was unprofessional. There have been some phony sites out there claiming that the LQP-79 virus is real. One person chatting on Yahoo Answers about the matter says that their Father is a scientist and ‘he says the virus is real’.

The name seems to not be real or established officially, but a zombie virus doesn’t sound all that ‘out there’, considering the fact that many conspiracy theories have been proven true. So have movies, that have depicted the future which came true. Or former top secrets in the Military who have come out years later and spilled some secret information.

Why couldn’t some sort of zombie outbreak happen? Or even a zombie apocalypse? What do you think? Leave your thoughts below!