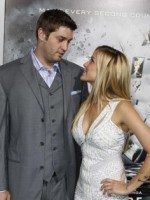 Former Laguna Beach reality star Kristin Cavallari, 24, got the surprise of a lifetime when her NFL quarterback boyfriend, Jay Cutler, 27, proposed to her. Sources confirm that the couple got engaged over the weekend while vacationing in Cabo San Lucas, Mexico.

The couple reportedly began dating last August when they met at a Chicago Bears game, where Cutler recently finished playing his second season. Since then, their relationship has progressed quickly and they have been spotted holding hands and acting cutesy at several high-publicity events.  There has been speculation in the media that an engagement has been looming between the couple for months now.

Cavallari rose to fame in 2004 when she appeared on the MTV reality television show, ‘Laguna Beach’. She held a starring role on the hit television series for two seasons.  She also appeared on another MTV reality show, ‘The Hills’ in 2009. Cavallari has been trying hard ever since to ditch her ‘Laguna Beach’ image by appearing in more serious television and movie roles. So far, she has landed only minor roles in a few TV shows and movies.  Despite her meddling success as an actress, her personal life has always been front-page tabloid news. In the past, she has been linked to men including Brody Jenner, Nick Zano and Chris Evans.

Cavallari’s fiancé, Jay Cutler, is currently a quarterback for the Chicago Bears. He rose to prominence by playing football at Vanderbilt University in the early 2000s. He began his professional football career in 2006 when he was drafted by the Denver Broncos. He spent three years with Denver before being traded to Chicago in 2009. Cutler’s relationship to Cavallari has been his first high-profile relationship.

There is no word yet on the official wedding date or where the nuptials will take place. If I were to put my money on it, I would say that the couple will enjoy a lavish wedding in Los Angeles (or on location in Mexico) sometime in November 2011. They will remain in the headlines for a few more months before ultimately heading fordivorce, citing ‘irreconcilable differences’ as the cause.

Sorry for the depressing prediction, Kristin, but your track record with men and your profession do not bode well for your marital success.