A 23 year-old, unemployed mother of 3, got violent after a Burger King drive-thru employee didn’t get her food order right… 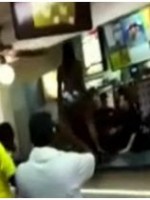 This Panama City Beach Burger King on Front Beach Road, was trashed after Kimesia Smith from Montgomery Alabama, came into town not for Spring Break, but just to have a ‘nice’ day at the beach and also grab a burger for lunch.

According to the report, Smith was angry that her order was messed up at the drive-thru, so she parked her car, went inside BK, argued with the management, then threw punches and objects at the management.

Other people at the establishment then start joining in with Smith, and they throw around objects and napkins! The place was trashed, then Smith was arrested.