Man Stabbed by Rooster at Cock Fight and Dies! 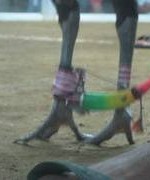 POST NOWTWEET NOW
A man has died, due to a stabbing by a rooster!