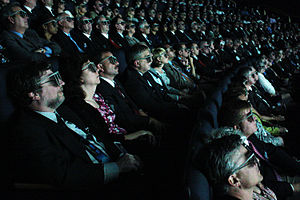 A pair of sealed and sanitized glasses from “AMC Loews” theatre in Manhattan, were taken by the I-Squad, and tested for germs. I-Squad hired a company called “RealD” to test the glasses for germs, and the glasses tested positive for a ‘fungal organism’ that can ’cause ear infections and bacteria found in feces’.

“It’s more than gross, it’s dangerous. It could make you sick,” said Dr. Kelly Reynolds, a microbiologist at the University of Arizona.

Another test that was ran, also found fecal contamination on a pair of Dolby 3D glasses given to I-Squad and then given to RealD, from “City Cinemas” on Manhattan’s upper east side. Dr. Reynolds says, “You should not put the [dirty] glasses on your face at all, especially near your eyes.”

I-Squad and RealD also reported that five other pairs of 3D glasses, including a pair made by IMAX, had a ‘nasty fungus hiding on them which can cause yeast infections, and hair and scalp infections’.

Dr. Reynolds says if you go to a 3D movie, take a simple alcohol-based wipe, and wipe the glasses completely, and that will kill 99% of any harmful germs.