Lady Gaga is ALL for Illegal Immigrants in the U.S.! 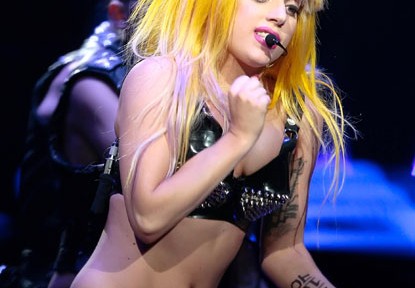 Lady Gaga just had a sold-out show in Phoenix, AZ, and she brought up the hot touchy topic on illegal immigration laws.

As no surprise, Gaga spoke out to the audience and went on a rant against the controversial law that instructs Arizona police to check the immigration status (Green Card yay or nay?) of anyone (Mexicans) they suspect of being in the country illegally. She told the crowd in a leadership fashion- “we have to actively protest” SB 1070. The Lady even had “STOP SB 1070” written on her left arm.

The loud mouth also said, “It’s really unfair and it’s disgusting [deportation of illegal immigrants].” Then Gaga dedicated her song “You and I” to a young boy who told her his brother had been sent back to Mexico.

Well, I guess we know now that Lady Gaga is all for ILLEGAL ALIENS being in the U.S.! Oh, and don’t forgot to buy her Latin-flare hit song “Alejandro”!