Movie Being Written About Tom Cruise’s Character from “Tropic Thunder” 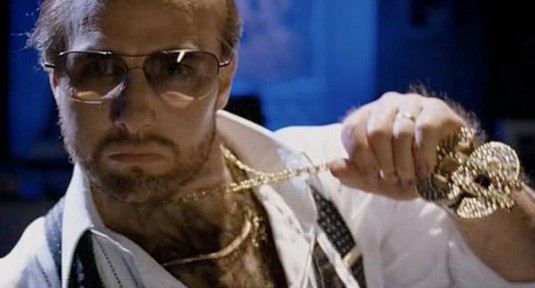 Have you ever seen the movie “Tropic Thunder”? If not, maybe you saw Tom Cruise on the MTV Awards this year, dressed like a half-bald, overweight a-hole producer type of guy. If you saw both like me, then you know all about Tom Cruise dressing in a fat suit, and dancing like a rich and old fat white guy.

Apparently either Cruise is so into this character he plays sometimes, “Les Grossman”, or he thinks everyone else in the world is so into the character, that Les Grossman is getting his own movie! That’s right, Ben Stiller, Stuart Cornfield, Michael Bacall and Cruise himself, are all pulling the production strings together to make the movie. Paramount Pictures and MTV are also on board to fund and house the production.

Ben Stiller says that the Les Grossman movie will be about “Les Grossman’s life story” and it is “an inspiring tale of the classic human struggle to achieve greatness against all odds.” Stiller then finishes, “and I am honored to be working with him [Cruise].”