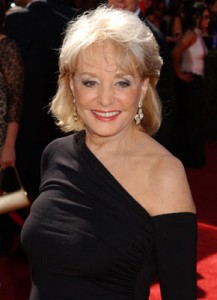 This morning on The View, while the ladies were discussing the American Idol finale with fourth judge Kara DioGuardi, Barbara Walters announced, in the ultimate Freudian slip, that Ryan Seacrest was “coming out” about his sexuality.  This caused an uproar among the ladies on the couch and the folks in the audience.

What Walters meant to say was that Seacrest made a few comments about Adam Lambert “coming out” officially on the upcoming cover of Rolling Stone. Seacrest posted the following statement on his Twitter account: “Adam will address the sexuality speculation soon.”  Lambert, however, is remaining mum on the subject, telling People to “Calm down…keep speculating.”