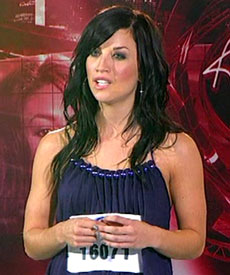 The definition of Shill-

“Somebody who promotes somebody or makes a sales pitch for something for reasons of self-interest.”

With that in mind, let’s look at American Idol contestant Joanna Pacitti.

Now for a show that is suppose to feature “newcomers” in an effort to “discover” them I would say Pacitti has already ‘been there, done that.’

But that’s not all folks! Star is reporting Pacitti may have another edge on the AI stage…
Pacitti is close friends with TWO Idol producers. One of the Idol insiders was reportedly Pacitti’s “manager” and “best friend.”   And get this; all three of them lived in the same building.

Talk about having friends in high places!