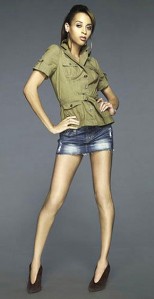 Tyra Banks surprises Isis King, the first transgender contestant on America’s Next Top Model, with sex reassignment surgery in an episode of her talk show to air Tuesday.

“This is not happening!” King, who was born Darrell Walls, says when Banks introduces her to Dr. Marci Bowers, a leading gender reassignment surgeon who has experienced the surgery herself. Bowers is paying for the surgery.

“[I feel] like I’m about to wake up,” says King – who lived in a homeless shelter in Maryland before trying out for the show.

The 22-year-old hadn’t gone under the knife yet because she couldn’t afford the $20,000 to $35,000 price tag. Watch her tearfully explain putting off the surgery above.

“It’s hard. I try not to think about it because it is something I’m really passionate about,” she says. “I feel like I really was born in the wrong body, and it’s just the one thing that makes me feel uncomfortable.”

King wouldn’t allow photos of herself as a male shown on the 11th season of ANTM, but reveals them for the first time on The Tyra Banks Show.

Why was she hesitant about the pictures?

“I look at it like yes, I’m the first transgender contestant, but okay, lets move past it now,” King explains. “I’m just a woman trying to compete just like everyone else.”