“The Battle Over Britney” is what Star magazine is calling it, I call it penis envy. The spicy report is indicating that “X Factor” judge Britney Spears is now ”torn” between Jason Trawick and Simon Cowell!

Cowell has, “banked on Britney acting crazy under the pressure and giving the show a ratings bonanza.”

The problem is Spears’ fiance, Trawick won’t take his eyes off Brit, “24/7 creepily watching over his woman to keep her, um, focused… Simon definitely feels like the show would be more fun if Jason wasn’t there and he wouldn’t mind Britney having a big freakout on camera. Simon is getting in Britney’s ear, trying to plant the seed for her to break up with Jason,” claims the insider.

Meanwhile, source are saying the pop singer is not only “pulling away from Jason,” but also “already showing the telltale signs of an impending breakdown.”

I think Simon and Britney would make a match made in heaven! What do you think? Does anyone care about Christina Aguilera the “singer” and “performer” anymore?! I had been noticing that she hasn’t had much love in a while from the press, until now, since she just filed for divorce with husband Jordan Bratman.

Her recent album “Bionic” bombed, and that was broomed under the rug, and now, she has a movie coming out called “Burlesque” that she is starring in, and she’s not getting much attention for that either. I mean, she even announced her split with Bratman, and Aguilera didn’t even get the cover of US Weekly- Courteney Cox graced the cover for her split with David Arquette!

As for Aguilera’s singing career, her comeback this time around pretty much failed mainly because she looked identical to Lady Gaga in her comeback video “Not Myself Tonight”, which looked like Gaga’s video “Bad Romance”. Although they were very similar videos, I thought Aguilera maybe still had the fire to stand on her own and be just as hot like her “Lady Marmalade” days! Things just aren’t working out for Aguilera right now because she made bad decisions on the album and video, or her record label did, or maybe they both did.

The press push for her upcoming film Burlesque isn’t that strong, but thank goodness for her, I just happened to stumble upon the Burlesque trailer on YouTube. I mean, I’m on the computer often and the trailer wasn’t front and center! Aguilera stars in the film, and she is a girl with a dream, who goes to L.A. and works her way into a burlesque dance group. Although the film looks cool, it just hasn’t been promoted in the news really, and I am starting to think that there is something definitely wrong with this picture. We all know Aguilera is a gifted singer and she’s a pretty good dancer, and she was once as popular as Britney Spears and Madonna- but what now?

Why are things not going so great for her? Does she need a better publicist? Manager? Agent? Maybe she does need better people working for her, but mainly, Aguilera needs to look within. She has had such a blessed and lucky life up until now, and she just doesn’t thank the people that made her a household name- her FANS! She doesn’t acknowledge her fans, she doesn’t keep in touch with her fans, and she does zero social networking. It’s quite obvious that she doesn’t care about her fans. Gaga and Spears have her beat by millions. Spears’ team always keeps up with the latest Brit news, and Britney herself tweets what she is doing often. Gaga tweets videos of herself and always updates her fans just like Spears’ team. Aguilera does NOT. Also, I have heard stories time and time again that Aguilera is “unfriendly” on set. She is rumored to be stuck-up as can be, and very demanding. She demands a huge team, a huge trailer, lots of security and a masseuse on the set. She doesn’t appreciate all of the fans who have bought her brand and they are turning their back on her for new stars that actually interact with their fans! If she doesn’t care about her fans, they won’t continue to care about her!

She should think about doing an act in Vegas now, or get on the ball and interact with the fans-or she just might be done. Either way, she needs an attitude adjustment and realize that it’s the public who makes a star. Oh and hanging out with her pal Samantha Ronson is NOT the answer. Egoista is now in check!

Britney Spears! I can never get enough! Can you? Love this batch! Remember when she was the Pepsi girl! Tears are buildin’ ya’ll. 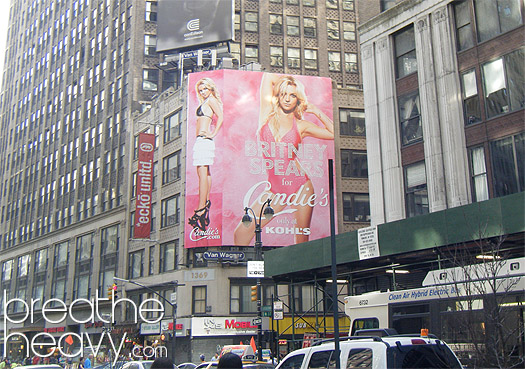 We LOVE Britney Spears here at ThecounT.com so how could we resist posting these fabulous “exclusive” pictures (now in high resolution) of Britney’s tampon string clearly visible as she performed “If You Seek Amy” for her Circus tour stop at the Honda Center in Anaheim, CA, on April 20th. We requested full-sized HQ pictures from our tipster and received them just now! so here you go! Enjoy, I think…

On Samantha Ronson:
Samanthaand I have been living together¦ and I finally found this great new house in LA so now we’re closer to each other. It’s literally around the block¦ I got my license back a week and a half ago. That was a big deal. It’s [restricted], but it just feels so good.

On Britney Spears:
She’s marketed as an entertainer, which is what she is. Not necessarily as, like, an artist. And I respect that about her, cause she doesn’t want to pretend.

On her future:
I’m talking to [lots of people]. One is Sean Penn I spoke to him again the other day. We’re trying to get Seth Rogen for this project, but Seth won’t call us back. So call us back, Seth, if you’re reading this!

Seth Rogan is the smartest son of a you know what!!!

I had something different in mind for this interview. Here are the questions I would have asked:

1. What does Samantha do that really turns you on?

2. Do you like waking up at 4pm every day and not eating?

3.  Do you call Jack Nicholson daddy?

4. If you could pinpoint one moment you truly lost your mind when was that? Parent Trap?

5.  When exactly are you going to cut those 6 feet long extensions?

6. No really…what about Samantha turns you on?