Love, 43, is the ‘friend’ who posted bail to release Kelly from custody Monday saying later that she didn’t use her own money to pay the $100,000 bail. ABC News reportedly obtained the bond slips identifying the friend as Valencia Love, who later confirmed to the news outlet that she did in fact post Kelly’s bond, reports CrimeOnline.

“It was his own money. I just posted bail for him,” Love said, describing Kelly as a “good friend.”

Kelly was arrested last week and charged with 10 counts of criminal sexual abuse, involving four alleged victims. Three of the four women were underage at the time of the allegations.

Singer R. Kelly is still hold up in a Chicago jail as of Sunday after it was revealed the crooner was unable to pony up 10 percent of his $1,000,000 bail.

Kelly, 52, was charged Friday with 10 counts of aggravated criminal sexual abuse involving four victims, three of whom were minors.

In bond court Saturday, a judge set bail at $1 million, requiring the performer to pay 10 percent to get sprung.

Bond can be paid by credit card, cash or check. Court officials must be able to talk to bank officials directly to confirm that an amount written on a check is covered, and that’s not possible when banks are closed on Sunday, reported 12NewsNow.

At the bond hearing, Kelly’s lawyer argued to the judge that his Grammy Award-winning client was far from wealthy, despite decades of success touring and creating hit songs for himself and other artists.

“This is someone who should be wealthy at this stage of his career. … He really doesn’t have any more money,” Kelly’s attorney, Steve Greenberg said, arguing for a bail amount within his client’s means.

Greenberg said at the conclusion of the hearing that he was happy with the amount set by the judge, saying he hoped Kelly could be out by Saturday evening. Which apparently did not happen.

Deputy Kenny Bryant of the Hinds County Sheriff’s Department is suing singer R. Kelly, over not only having an affair with his wife and ruining his marriage, but also ruining his entire life.

Lucky for officer Bryant, Mississippi just so happens to be one of the only states in the union that allows a person to sue another for breaking up their marriage, as noted by rickeysmileymorningshow.com. Bryant married Asia Childress on July 15, 2012, and says he was aware that she had a relationship with Kelly prior to their marriage, but was told that it was over. He says the marriage was good until Kelly came back on the scene. Bryant claims Childress convinced him to quit and move to Atlanta so she could pursue a music career. But he now believes his wife moved there only so she could continue her affair with Kelly. He also claims that during their 5-year affair, Childress got chlamydia from Kelly. END_OF_DOCUMENT_TOKEN_TO_BE_REPLACED It’s no surprise Calhoun was pictured with the singer, as the two have reportedly been dating since last year. The 20-year-old is reportedly an aspiring model and entertainer and studies at The Art Institute of Charleston, according to her Twitter account. END_OF_DOCUMENT_TOKEN_TO_BE_REPLACED

Crooner R. Kelly, is again in trouble with the law. New information uncovered by officials has raised the “level of concern” alleging Kelly sexually exploiting and held young girls and women against their will at his Johns Creek residence.

“A detailed local investigation by the John Creek Police Department has provided key information that we believe is enough evidence that gives the Fulton County District Attorney’s Office all it needs to advance a criminal investigation of the well-known allegations. END_OF_DOCUMENT_TOKEN_TO_BE_REPLACED

Meet Halle Calhoun, 19, musician R Kelly‘s new girlfriend. The teen met Kelly, 49, backstage at a concert while she was with her mom.

Kelly has been spotted taking his new girl to lots of exciting places, like 21 and older clubs.. Kelly took her to the GOLD ROOM in Atlanta this weekend, not sure how she got in because it is 21 and older, but I digress. h/t blacksportsonline 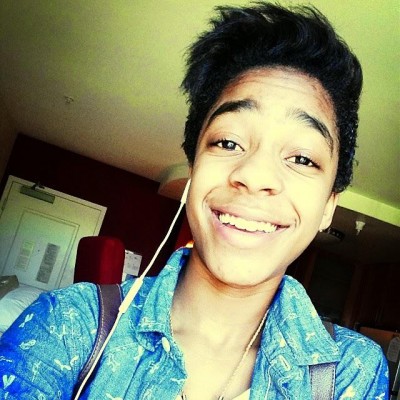 R. Kelly’s 13-year-old child—born as Jaya—has recently come out as transgender and transitioned from female to male. END_OF_DOCUMENT_TOKEN_TO_BE_REPLACED