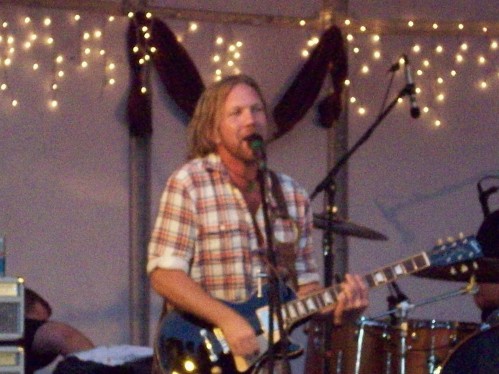 How lucky was I to go to another great concert at the “Rathskeller” (in Indianapolis, Indiana) again, this past Saturday night, to see Devon Allman and his band Honeytribe (Yes, he is Greg Allman’s son of the Allman Brothers). I was just at the Rathskeller 2 weeks ago and saw Carney, another great band that is a must see (read my review here)!

I wasn’t sure what to expect for Honeytribe, and this concert really wasn’t promoted that much.  I saw the concert listed in the local “MetroMix” paper and on the Rathskeller web site.  I then went to Myspace to hear a little bit of the band’s music, wondering if he was anything like his father, Greg Allman, and I got just enough of a good tease to push me out to the concert on Saturday night.

On my way!…
I was quite excited to go to the Rathskeller on Saturday night after listening to the tunes on Myspace. The Rathskeller has been booking some great touring bands there and for only a $5 cover, you can’t beat it. Plus, they have a huge selection of various beer brands, and the German food is authentic and very tasty.

It was a beautiful Summer night.  At the Rathskeller, you are down in the outskirts of downtown Indy and you have a beautiful view of the downtown lights.  The Rathskeller is situated in an area that is called the “Mass Ave” district, and this part of town has super cool and unique businesses. This part of Indianapolis really makes the city shine. There are great places to eat at Mass Ave like Bazbeaux Pizza (best pizza in Indianapolis!) and Yats cajun/creole. There is unique shopping like this toy store Mass Ave Toys, and there’s this locally made jewelry in one of my favorite shops Silver in the City.  On the street Massachusetts Avenue, you can even just simply get a Starbucks there, sit alongside the street, and people watch for fun. Nice people stroll around the area, or they are sitting outside at the bars and restaurants, eating and drinking, just having a good time. If you visit Indianapolis, make sure to check the area out, along with the Rathskeller, which is just at the East end of Massachusetts Avenue.

Anyway, I got there to the Rathskeller just in time to see a little of the Corey Williams Band that was on before Honeytribe.  They are a local band and actually reminded me of a Dave Matthews type style.  Pretty decent guitar player too.

At about 9 pm, they introduced the band.  The bass player started up with his bass, the drummer joined in and out came Devon Allman.  I am sorry I do not know the names of his songs, but none of them let you down.  I would describe the music as bluesy-rock with soul.  Devon is one of the hardest working guys in rock; including the 2 other guys in the band – George Potsos on bass, and drummer Gabriel Strange.  The first album/CD is called “Torch” with a 2nd CD coming out in October called “Space Age Blues”.  They did do this song and I did recognize this from listening earlier on Myspace.  I really love this song!  Devon does look somewhat like his famous father Greg.  He can play just as good or even better!  He can sing too.  He knows how to put on a great show and interacts with the crowd!

There was a guy that was doing his air guitar out in front of the stage and it was amusing the band.  He was then quickly joined by an air drummer!  Devon teased them by playing the song “Teen Spirit” by Kurt Cobain.  There was an instant mosh pit right in front of the stage! I didn’t expect a mosh pit but it happened-it was easy going, not like a Metallica mosh pit.  The band then did a medley of many songs including the famous “Midnight Rider”.  The song had everyone out of their seat and singing along.

At one point, Devon jumped off the stage area and on to the floor area, and was quickly joined by many of the fans there.  He was playing his guitar right in the middle of everyone and rocking it out.  It was very cool.  He is one of the best!  He was getting the crowd involved and many were out there dancing.  Everyone was having a great time!

The band kept playing and it was 11 pm which is the curfew for the outside venue down in that area.  The band had come back for an encore and played until 11:30 pm!

After the show, the band hung around on stage and took pictures with all of the fans who wanted one, and the band signed autographs.  I am sorry to say my camera’s battery died during the show but I was able to get some good pics before that happened.  See the photo gallery below.

I will definitely go and see Honeytribe when they are back in Indy.  They will not disappoint!  If they are going to be in your town or area, I would recommend that you go check them out.  Truthfully, the band deserves to be the headliner band for larger shows, and hopefully, that is where they’ll be in the near future.