what was light in sky Thursday Portland

PORTLAND, OR. (THECOUNT) — People from the Oregon Coast, to Salem, to the Portland metro area, to Southwest Washington reported seeing an unknown object streaking across the sky around 9 p.m. PST.

The ball of light was spotted flying across the sky in Northwest Oregon and Southwest Washington Thursday night accompanied by reported explosions. 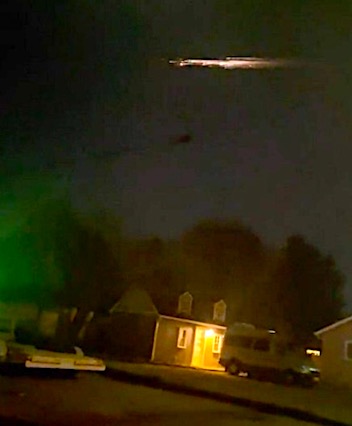 It’s still unclear what the streaking light was, or what caused it. The National Weather Service said it fits the bill for a potential rocket that did not successfully have a deorbit burn, but has not officially confirmed that to be the case, reports KGW.

People from the Oregon Coast, to Salem, to the Portland metro area, to Southwest Washington reported seeing the flashing light around 9 p.m. Some people reported hearing explosions in the sky as the flash went by.

Anyone else see something burning up in the atmosphere? ⁦@KGWNews⁩ Out near McMinnville. #ufo #meteorite #space pic.twitter.com/jeJ1zuRRU5