Oprah Falls Hard On Stage While Preaching Wonders Of ‘Balance’

LOS ANGELES, CA. (THECOUNT) — Oprah Winfrey took a nasty tumble during a performance of her speaking tour at the Los Angeles Forum arena on Saturday.

O was talking about her definition of balance, when without warning, the media honcho went down a in a heap akin to a ton of bricks. 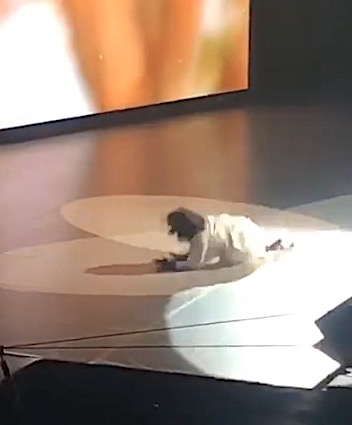 “Wellness to me means all things in balance. And balance doesn’t mean all things are equal or at peace at all times.” Oprah then went down hard, but seemed okay. She said, “Wrong shoes!”

Video of the immediate aftermath was also posted on social media, and yeah … it looks like the shoes she was wearing (heels, maybe) were responsible for the collapse. Again, not to worry, everyone — O was, in fact, okay in the end, and it appears she even swapped those pesky trippers for some more reliable ones eventually, reports TMZ on Saturday.

Oprah did not appeared to be injured and even danced later on during the engagement.