RIO DE JANEIRO, BR. (THECOUNT) — Brazilian police say a man is holding dozens of people hostage on a public bus in Rio de Janeiro and is threatening to set the vehicle on fire.

The Federal Highway Police said Tuesday that negotiations were underway with an armed man who has been holding 37 people hostage since about 5:30 a.m. on a busy bridge linking Niterói to downtown Rio de Janeiro. 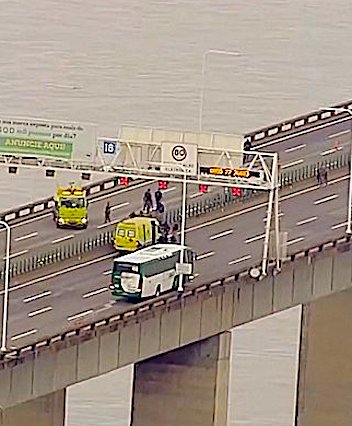 At least four hostages have been released so far, telling authorities that the man had spilled gasoline in the bus and threatened to set it on fire. They say the man has identified himself as a policeman, although this has not been confirmed, reports KTLA.

Authorities said the man has not made any particular demands and appears to have “psychological problems.”

Geo quick facts: Rio de Janeiro is a huge seaside city in Brazil, famed for its Copacabana and Ipanema beaches, 38m Christ the Redeemer statue atop Mount Corcovado and for Sugarloaf Mountain, a granite peak with cable cars to its summit. The city is also known for its sprawling favelas (shanty towns). Its raucous Carnaval festival, featuring parade floats, flamboyant costumes and samba dancers, is considered the world’s largest – wikipedia.