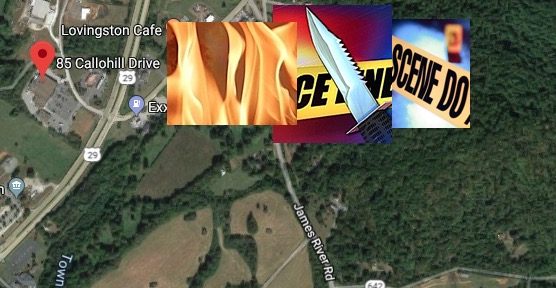 Beverly, 34, was charged by the Virginia State Police with 1st-degree murder and one felony county of concealing a body after allegedly stabbing Watson and then setting him on fire. He is being held without bond at the Albemarle-Charlottesville Regional Jail.

The Nelson County Sheriff’s Office received a 911 call about a body located off a path behind the Food Lion supermarket located at 85 Callohill drive, in Lovingston.

Upon arrival, deputies located the remains of Watson.

Based on the description provided by witness statements, the Sheriff’s deputies were able to locate Beverly a short time later.

He was hiding in some trees not far from where the remains of Watson were found, reports WSET.

Further investigation revealed that Beverly and Watson had gotten into a heated argument that lead to a physical altercation.

Watson was stabbed multiple times and then set on fire.

That murder weapon was then found on the scene. Geo quick facts: Lovingston is a census-designated place in and the county seat of Nelson County, Virginia, United States. The population as of the 2010 Census was 520. Its ZIP Code is 22949. It was among the communities severely affected by flash flooding from Hurricane Camille in 1969 – Wikipedia.