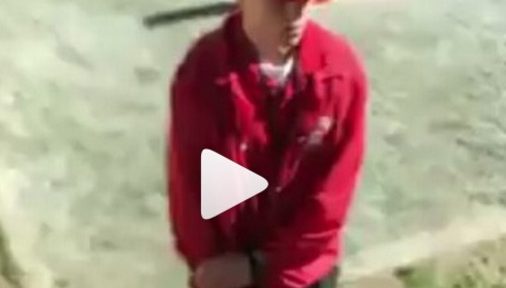 A security guard working Sunday’s San Diego Chargers game against the Oakland Raiders has been fired after a video emerged on social media showing him playing with himself while on the field directly in front of a squad of cheerleaders.

The naughty security guard, whose name was not immediately released, worked for Elite Security, the company hired to provide security at Qualcomm Stadium. The video, released on Instagram, contained the follow caption: “San Diego Chargers Security guard was openly [expletive] RIGHT IN FRONT of us during the game, while watching the cheerleaders jump up and down!!! I can’t believe this was allowed. Such a complete disregard for women’s rights and public decency! I am truly horrified at this guard lack of respect for women’s rights #chargeon #chargers #NBC7 @nbcsandiego #pervalert #elitesecurity #nflmeme #nflmemes #boltuporshutup #chargersfootball #nflfootball #philiprivers #espn #nflnetwork #sports #football #california #chargersfan #boltgang #sdchargersfans #sdchargers #sandiego #sandiegolife #nfl🏈 #onecharge #mustang”

The video shows the guard, in a red jacket, openly moving his hand up and down while it was placed in his pocket. Cheerleaders can been seen practicing a few yards away. After the video was released, Elite Security issued the following statement:

“Elite has become aware of the social media posting of inappropriate actions of an Elite staff member at Qualcomm Stadium on December 18th. Elite would like to apologize to anyone who was offended by this isolated incident. Additionally, Elite has opened a formal investigation into the matter and has acted swiftly in terminating the employee involved. Elite insists on the highest moral standards from our employees. Elite’s standard operating procedure is to employ security officers that pass a required background check through the State of California Department of Justice and the Federal Bureau of Investigation. Elite has confirmed that this guard did in fact pass all state and federal background screening processes and successfully completed all of the licensing requirements. There was nothing in the screening process that would indicate that this type of conduct was foreseeable. Elite has been providing staffing at Qualcomm Stadium for over twenty years and has never experienced this type of incident involving any of its employees. Elite has many loyal hard working employees and they should not be judged by the actions of this one regretful isolated incident. Due to privacy laws, we are unable to release the name of the employee involved. Elite is cooperating with all relevant entities regarding this matter.” While most agreed the guard should be fired, not everyone on social media thought the guard’s actions were actionable:

Jason Muchnick, Owner-operator at Move Clean Organize:
Public humiliation? Got it. Fired from his job? Totally understood. But CRIMINAL? COME ON. For what, making his parachute pants dance around a bit while unfathomably attractive women dangle their tits and twerk their camel toes 10 feet from his face? Twenty-six NFL teams have cheerleading squads. If you think sexual fantasy isn’t a significant part of the NFL’s marketing plan, you aren’t paying attention. Sure, fire this guy for blowing off a little steam at the office. But you better believe that 26 NFL teams are hoping their fans do the SAME EXACT THING in the privacy of their own homes every week. Personally though, I think the guy was just looking for a packet of mayo. :D

Daniel Knittle, Penn State Harrisburg:
If Bill Clinton had a son. Could be his hand was cold an he was just getting it warm.

fatsolio:
Women’s rights. hahaha, how does this have anything to do with women’s rights? Stupid feminist libtards.

It’s not the first time Elite has been in the news for all the wrong reasons, in 2012 the company was accused of violating child labor laws:

“Elite Security may have been violating child labor laws at Chargers games. Just wonderful. They’re not dealing with anything else down at Chargers Park right now, so it’s nice of Elite to pile it on.  As a fan, I’ve had nothing but bad experiences with Elite Security. I’m sure some of them are great, but the ones I’ve dealt with are not… this is my favorite ever story about Elite Security that will have you laughing in disbelief. Remember, these are the same jokers that got Nick Lachey kicked out of the Q just for being an awesome fan. The worst.” h/t lobshots