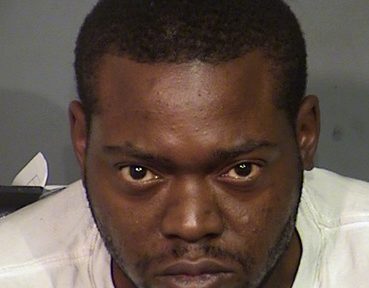 Police say suspect Kenneth McDonald opened fire on a vehicle while traveling on the I-15 freeway in Las Vegas striking and killing a female passenger and wounding her husband. The female shooting victim died from her injuries while her husband remains in stable condition.

McDonald, 29, was eventually apprehended at a CVS Pharmacy near Las Vegas Boulevard after sexually assaulting a woman at or near the store. An investigation revealed a black male suspect shot at multiple vehicles while driving southbound on Interstate 15. The 40-year-old female passenger was struck three times, along with her husband who was driving the vehicle. This caused the vehicle to crash near the Spring Mountain Road exit. A semi truck and other vehicles were also involved in the collision. The suspect fled to a CVS near Las Vegas Boulevard and Windmill Lane where he sexually assaulted a woman. The woman was able to get away. h/t ktnv K9 units took down McDonald. He was transported to the hospital for police dog bite injuries. He was taken into custody shortly after being treated.