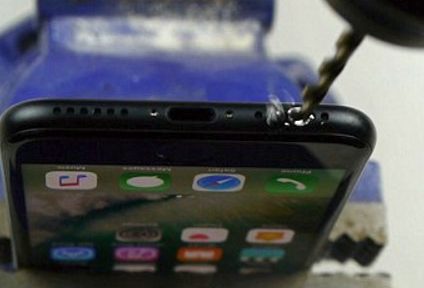 While the majority of viewers were not taken in by the wind-up video, which has been viewed more than 8 million times, some have been left scratching their heads after their destructive DIY adjustment made no difference. James Ceja wrote: ‘I tried this and ended up with display destruction and it not working… I really committed the biggest mistake of my life by watching the his video.’ David Iriarte posted: ‘ A friend of mine told me it worked for him, but my iPhone won’t turn on after I drilled the hole for the jack. I checked and it was the 3.5mm drill, so I made no mistake there! What happened? Any of you have the same problem?’ h/t dailymail

During the fake tutorial, which has been viewed over 8 million times, the man uses a clamp to keep the headset in place before drilling directly into the bottom of the pricey device.