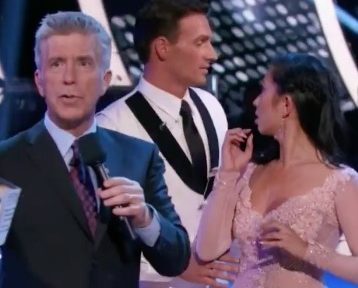 Ryan Lochte was rushed by protesters after his Dancing With the Stars debut. The tense moments came on the heels of the Olympic athlete’s robbery scandal in Rio.

Lochte and his dancing partner Cheryl Burke were waiting to hear the response from judges when all hell broke loose as protesters rushed the stage. Carrie Ann Inaba was attempting to start the judging but became distracted by the commotion, which was never shown on-camera, however an eyewitness tells E! News that men wearing white anti-Lochte T-shirts rushed the stage in what looked to be an attempt to attack the Olympian, but the show’s security team made sure nothing happened. Host Tom Bergeron cut to commercial break, but upon return, a noticeably shaken Lochte said, “I’m doing good. So many feelings are going through my head right now. A little hurt. I came out here and I wanted to do something I was completely uncomfortable with, and I did.” E! News learns that there was a whole row of people with the anti-Lochte shirts on (plain white T-shirts with his name and a no symbol on top) that stood up when this happened. They were immediately kicked out from the show to the sound of the crowd booing the protestors. “Everyone was freaked out, especially Ryan and Cheryl. They were just frozen the entire time in utter shock,” the insider tells us. h/t e!

“I’m hurt for Ryan,” Cheryl told Tom after the commercial break. “He’s sweet, he’s kind. He’s working his butt off. I hope people give him a chance.” Once security cleared the area, the audience cheered, “We love you, Lochte,” but the swimmer looked “very choked up” after the incident.