VIDEO HIGHLIGHTS: Do You Think Conor McGregor Did Enough To Defeat Nate Diaz? 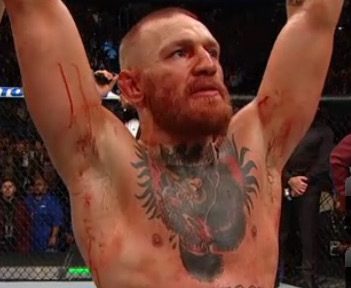 (Via mmamania) Conor McGregor slayed his Stockton, Calif., demon last night (Sat., Aug. 20, 2016), defeating Nate Diaz in the pay-per-view (PPV) main event of UFC 202, which took place inside T-Mobile Arena in Las Vegas, Nevada. However, it took every fiber of the Irishman’s being — particularly midway through the five-round, non-title Welterweight rematch — who started early (again) and struggled late (again).

Indeed, “Notorious” put a tremendous emphasis on conditioning and cardio after both failed him in their first fight at UFC 196 five months ago, which ended with Diaz strangling McGregor into second round submission. It appeared to serve him well in the first two rounds as McGregor obliterated Diaz’s lead leg with kicks and dropped him on three separate occasions with hard shots. But, Diaz hung in there — like he always does — and began to turn the tide toward the end of the second and for the entire third frame. Fortunately for McGregor, he was able to weather the storm, dig deep, and battle back in the final two rounds to ensure that Diaz didn’t run away with it, literally, or even worse, finish him once more. It was a terrific fight, one deserving of a third and final chapter.