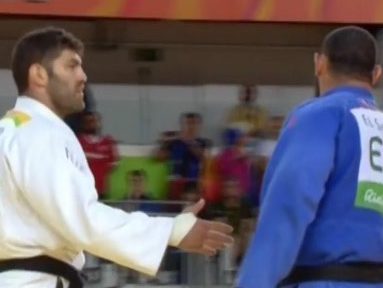 Egyptian judo fighter, Islam El Shehaby, awkwardly refused to shake the hand of his Israeli opponent, Or Sasson, after losing his match Friday at the Rio Olympics.

After completing a match winning 2nd takedown, Sasson went in for a customary hand shake, but was sourly snubbed by El Shehaby. Boos could be heard echoing from those in attendance. After the match, Sasson approached El Shehaby to shake his hand — customary in Judo matches — but El Shehaby refused. People in the crowd reportedly booed.It’s unclear why El Shehaby refused the handshake — he could have been pissed from losing — but there are reports that it was more politically motivated. h/t tmz

Some Egyptians had rallied for El Shehaby to withdraw from the fight to avoid having to compete with an Israeli opponent.