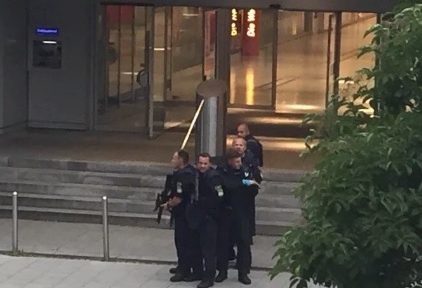 The shooting occurred at around 6 p.m. local time at the Olympia shopping mall. The shooter was neutralized according to a police spokeswoman. *Correction* the shooter or shooters have not yet been apprehended. Lynn Stein, who said she works at the Jack Wolfskin store in the mall, told CNN that the shooter was inside the mall.

“I heard several shots,” Stein said. “(I) was just going to buy something while my coworker was still in the shop.

“People started running. I went outside as well; more people running outside. I think I heard more shots. Then it sounded like he went to the parking house next to the mall — several shots there.”
Stein said she then went back into the mall.

“I saw … somebody lying on the floor, presumably dead, I don’t know. Or badly hurt. And there’s a woman over them, crying.”
Eventually, she said, police “told everyone to clear off the area and go to the other side of the street.”

“And we just stayed there for a while until police told us to go further back and further back,” she said. h/t cnn