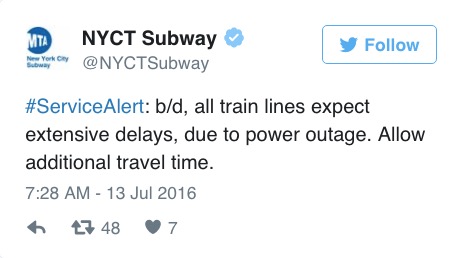 Commuters are experiencing massive MTA delays over a power failure at rail control.

Travelers were warned Wednesday to expect “extensive delays” on all subway lines, according to the MTA’s online service tracker. In addition to the power outage, signal problems were further stalling trains on the Nos. 1, 2, 3, 4, 5 and 6 lines, the agency said. h/t pix A spokeswoman for the MTA said at 2 p.m. that service was running with delays.