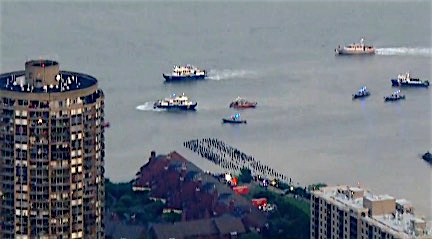 A small plane has reportedly crashed into the Hudson RIver, in Edgewater, NJ. The Federal Aviation Administration said it received a report a World War II vintage P-47 Thunderbolt aircraft may have gone down in the river two miles south of the George Washington Bridge.

The New York Police Department said the plane crashed Friday night in the river closer to the New Jersey side. The NYPD was sending boats to the crash scene.

It was unclear how many people were aboard the plane and what condition they were in.

Fleet Week was being celebrated in New York City this week, bringing thousands of Navy sailors to the city.

Check back for more details as they evolve.