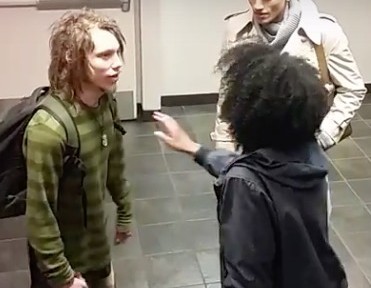 A viral video caught a black female San Francisco State University student while she was accusing a fellow male student of cultural appropriation over his dreadlocks.

The video, which was uploaded to YouTube captured an unidentified woman pulling and tugging on student Cory Goldstein in a hallway Monday because she thinks dreadlocks are reserved for the black community. “You’re saying I can’t have a hairstyle because of your culture? Why?” he asks.

“Because it’s my culture,” the woman replied.

Goldstein sarcastically noted dreadlocks were prominent in Egyptian culture and asked the woman, “Are you Egyptian? Nah.”

“Are you Egyptian? Wait, where’s Egypt? Tell me. Where’s Egypt?” the woman asked as she physically prevented him from leaving the area.

“Yo, girl. Stop touching me,” Goldstein told her.

“Come back. Come back,” she said as she pulled him by the arm.

The women then realized she was being filmed.

“Why you filming this?” she said.

“For everyone’s safety,” the cameraman answered.

Goldstein told KRON-TV that the incident started when the woman wouldn’t hand him a flier because she was offended by his hair. He told the news station that she said, “Sorry we don’t want people with your hair here.” h/t theblaze The university said in a statement that university police were called the scene after it occurred. “[N]o criminal charges have been pressed at this time to the University’s knowledge,” the statement said.

“San Francisco State University promotes the rights of the campus community to engage in free speech, but does not condone behavior that impedes the safety or well-being of others,” the statement added. “We are taking the matter seriously and will promptly and thoroughly investigate this incident through applicable University channels, including our campus student conduct procedures.”