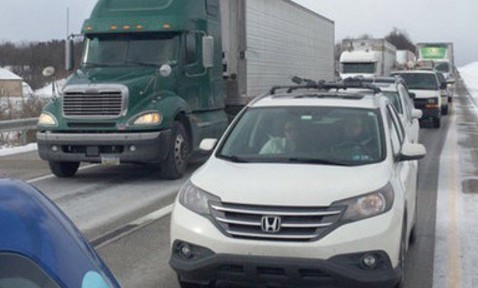 Poor visibility is being blamed for a massive multi-vehicle pileup Saturday morning that closed both the east and westbound lanes of I-78 in Bethel Township, Pennsylvania.

At least 60 vehicles were involved in the crash as frigid temperatures dipped below 15 degrees. As many as 3 fatalities were reported, however the exact number is unconfirmed. “There were multiple vehicles and multiple injuries,” LeBron said, adding that he could not confirm early reports of fatalities. “None of the fatalities are confirmed yet. It’s still being investigated. We’re hoping for the best. We don’t know.” h/t philly People involved in the mass accident were being kept warm in the back of tractor-trailers until rescue buses arrived. Area temperatures were reported at 15 degrees.